The latest news from Sterrehof stud

At the end of the year it’s time to look back at the highlights of our top horses in 2018. For sure the last show of the year was very special. Just two weeks ago Sterrehof’s Calimero and Marc won with their team Madrid in Motion the first edition of the Global Champions League Super Cup in Prague. Marc is clear about this achievement: ‘This is definitely the highlight of the year. Without any doubt. This final could be compared to a big championship in my point of view. Everything went well from the first day on for our team. We had three strong horses and strong jockeys in Prague, but then still you need to have Lady Luck on your side. Frankly, I have never experienced such a feeling as after this victory. It was amazing!’ 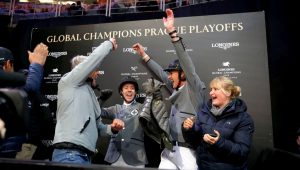 Very special is that the year of Calimero and Marc not only ended with a bang, but also started like that, with a win in the Grand Prix of Amsterdam (picture below), which was sponsored by our company and by Anemone Horse Trucks. In the months after that several top performances were delivered in five-star Grands Prix, with successively an 8th place in Hong Kong, 7th in Madrid, 3rd in Villach and 5th in Paris. Special were also the two clear rounds of our combination for the Dutch team in the Nations Cup of Rotterdam. All this almost logically led to a selection for the WEG in Tryon. Despite an Olympic qualification for the team and the best individual result for the Netherlands, Marc looks back on Tryon with mixed feelings: ‘We have been doing a lot of good work with the horses all year round, but we were a bit unlucky during the final competitions of the outdoor season and then I mean Tryon and the FEI Nations Cup final in Barcelona. Especially in Barcelona we would have realised a jump-off for victory with one unlucky error less for the team. But that’s how it works in our sport. In Prague it all fell into place but that’s not always the case.’ 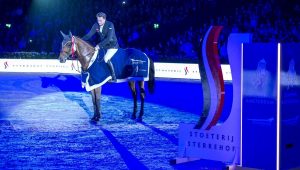 In addition to a strong year with Calimero, with whom the focus in 2019 will naturally be on the European Championships in Rotterdam, Marc also scored remarkabe results with his other two five-star trumps. Recently sold Sterrehof’s Baccarat arguably had his best season under Marc, with a great performance during CSI Twente (victory in a major class and 4th in the Grand Prix), the best Dutch result in the Nations Cup of CHIO Aachen (0/1, 3rd with the team) and for the second year in a row a great result in Münster (5th in the Grand Prix).

The gap that Baccarat leaves behind will be filled by his half-brother Sterrehof’s Edinus. This nine year old gelding had his breakthrough at the highest level this year, something that announced itself early in the year with a second place in the Dortmund Grand Prix. Marc: ‘Edinus is a super addition to our team of top horses. He is still unexperienced at the highest level and for sure there is room for improvement. He fits well in with Calimero, also in 2019.’ 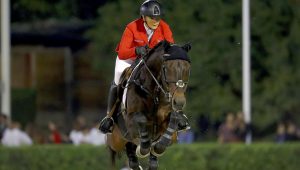 Sterrehof’s Cayetano Z was the fourth Sterrehof horse at the highest level in 2018. He even managed to take a step forward with Julia, as could be seen during the Nations Cup Final in Barcelona (picture). ‘Barcelona was very good’, Marc confirms, ‘Of course it remains a pity that he had a fault at the last obstacle. We made a conscious decision with Cayetano not to go to the World Cup. We could have done that, but we said to each other: “We will not do it. It takes much out of a horse and we want to enjoy Cayetano at the highest level a few more years.” We constantly keep that in mind in our management.’

Obviously we hope that we can reap the benefits of this in 2019. As far as Cayetano is concerned, there is even more to expect than sports performances alone. He stood at stud for the first time in 2018 and we look forward to his first offspring out of real performance mares like Sterrehof’s Ushi, Sterrehof’s Centolina and Sterrehof’s Felisimo.

Pictures 1 and 2 by Stephano Grasso/GCL

Sterrehof Stud always offers talented showjumpers in several age categories. Please click the image for more details on that particular horse or refer to the overview. Please contact us for more information on the horses currently for sale at our stud.

Three years after Marc and Sterrehof’s Dante N.O.P. fantastic victory, Jumping Amsterdam was finally back on the calendar.